How to be successful in cosplay contests – Germia 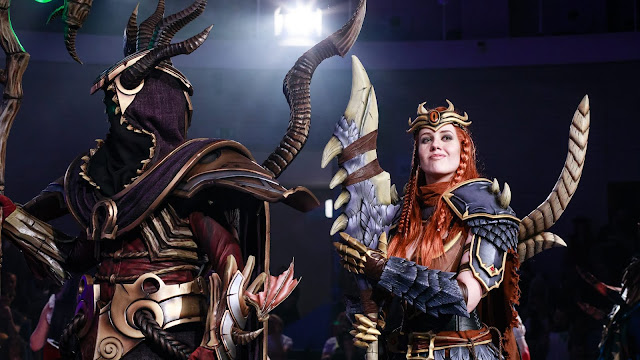 I got many requests to write about my experience from cosplay contests. I’ve been a part of a lot of very different cosplay contests with different winning criteria and I’ve been part of them as a contestant and also as a judge. This time, the goal of my article is to help others to get better in competing and share my knowledge of what works and what I find useful, that can eventually help you win a cosplay contest.

Disclaimer
Keep in mind, that the article is just sharing of MY thoughts, MY opinions and what works for ME. You can learn from my experience, you can agree or disagree on few points, but I don’t guarantee anyone to win a cosplay contest – the effort is up to you!

Competing in a cosplay contest is a big step for a lot of cosplayers, because it brings new demands on them. If you decide to compete, you have to (most of the time):

Suddenly the „cosplay has no rules“ motto changes into a lot of rules, that fit the contest you want to appear in. Cosplayers competing in contests have to be prepared for more than that. They will be:

Also, please, take a look at the rules of the contest before you even enter it, so you are not surprised!

– Costume based – 49 % or more weight of the points is just for the performance, for example Eurocosplay (80:20)

Solo contests are one of the most usual types of contests, it is the easiest format for an eventto manage and easiest to prepare a costume for, because her/she doesn’t have to cooperate with others. Making a stunning performance alone without interaction is harder than in a group.

Duo and group contests are harder to organize for events and for cosplayers, but the performances are usually better, because the cosplayers can interact with themselves.

If it is about costume making or performances, you can always learn something new. Performancewise – it is good to watch past year’s contestant’s efforts, learn from their mistakes and see how the contest looks like and what it prefers. Also watching performances of other people can help you for some ideas for your perfomance.

Your props have to have meaning and function.

– The props you make for your performance are very important for storytelling, so be sure to make them impressive and good looking. Also, each prop has to have a meaning and be important somehow to your performance – you can insure the importance by interacting with the prop (or make it interactive).

•Where to learn: Winners of ECG, WCS, C4 – usually a good use of props

Prejudging is a part of contests, where contestants come face to face with judges to show them their costumes and props up-close. It happens usually before the performance on the stage and it’s very important to be well prepared for it:

There is so much to say about the performance, so let’s get into it:

And if you like this stuff I do, you can support my work by donating on my PATREON, because their donations made this tutorial possible.